A must on any garden visitor’s wish list is a stroll through the inspirational designs of the late Rosemary Verey (1918-2001). For this reason, the gardens at Barnsley House were included in our tour designed to celebrate the RI Federation of Garden Club’s 75th anniversary; our visit enabled us to discuss the gardens with a horticultural guide as well as to speak with one of the WRAG (Women Returning to Amenity Gardening) women who volunteer at the property. This resurrection of a scheme designed to maintain country house gardens while traditionally male gardeners were off fighting in World War II, has enabled these young women to study gardening while volunteering with expert horticulturists. 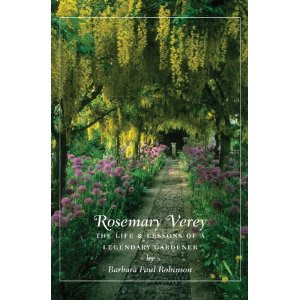 Verey was the last of the great English garden legends, whose creations atBarnsley House are familiar from countless books and magazine articles – a little knot garden, an enchanting, golden yellow laburnum walk (pictured on the book’s cover), and a kitchen garden (potager). Although she embraced gardening late in life, she quickly achieved international renown. She was the acknowledged apostle of the "English style," on display at her Cotswolds home in Gloucestershire, the adviser to the rich and famous, including Prince Charles and Elton John, and a beloved and wildly popular lecturer in America. With her architect-husband, David, she created the gardens at their home that became a mandatory stop on every garden tour in the late 20th century. The 17th century house was purchased after her death and has become an exclusive bed and breakfast, but the gardens may be visited by appointment.

At sixty-two, she wrote her first book, followed by seventeen more in twenty years. Her husband's death, shortly after her career began, added a financial need for her to continue writing, speaking and consulting. Through hard work and determination, she tirelessly promoted herself and her garden lessons, traveling worldwide to lecture, sell books, and strengthen her network.

She encouraged her American fans to believe that they were fully capable of creating beautiful gardens while developing a native style. She also re-introduced her countrymen to their own gardening traditions, referencing English garden history and its literature. This book, written a decade after her death, recounts her story as the personification of the English gardening style, capturing her genius for creating gardens.