When I was a young child I frequently heard a plaintive song during the summer months that evoked feelings of melancholy in me. Only later did I realize that this five note song was the cry of the aptly named mourning dove, one of the most ubiquitous North American birds. Indeed, it is the only North American bird that breeds in every state (although it’s a vagrant in Alaska), and scientists estimate its population at 400 million. 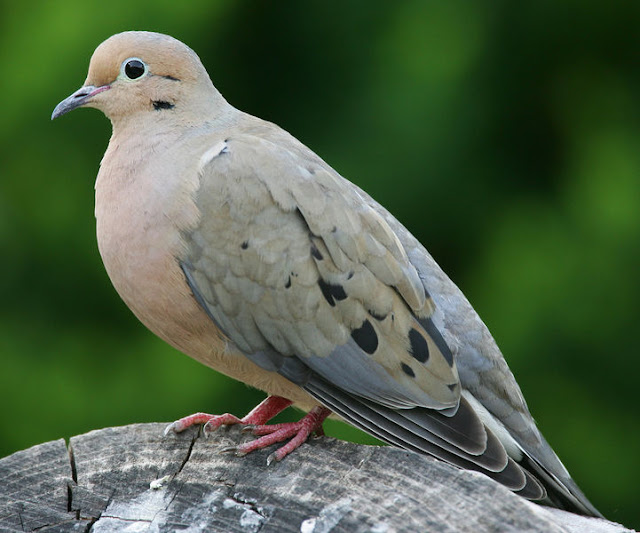 Unmated males most commonly utter this sad cry, seeking to attract a life partner. Yes, bird experts believe that mourning doves remain with the same bird for the five to six years of their average life span. The male bird puffs up its chest and bobs its head when attempting to attract a particular female. When he’s found his mate, he shows her several potential nesting sites, allowing her to select the one she prefers. The pair commonly produces two white eggs that incubate for 14-15 days. The eggs are constantly tended, with the father taking most of the day shift, and the mother doing the night duty. They are devoted parents, rarely leaving their nest untended. If an interloper should discover their young, one of the parents might feign a broken wing or engage in other distracting behavior to preserve its brood. The pair often utilizes the same nest for the 3-5 sets of eggs it lays during a single season.

We’ve all seen mourning doves throughout our lives: they’re small pigeons, rather elegant looking to my eye, recognizable by their light brown bodies, black spots on their wings, and black crescent shaped area below the eye. If you have a bird feeder, you’ve noted that they’re frequent guests, enjoying all sorts of seeds, and eating up to 20% of their body weight each day. They peck at the seeds and store them in their crops; once their crops are filled, they generally fly to a safe perch to digest. They're such delicate-looking birds that I was astonished to learn the enormous capacity of their crops: one greedy mourning dove had 17,200 bluegrass seeds in its crop awaiting digestion. (We can thank the Cornell Ornithology lab for counting all those seeds.)

The mourning dove is the nation’s most common game bird, with hunters bagging between 20-70 million of them each year. No wonder they utter that mournful cry! Mourning doves are hunted here in Rhode Island during prescribed dates in the fall, with a limit of 12 birds a day. However, the good citizens of New Hampshire, who must be a romantic bunch at their core, overwhelming rejected a proposal to permit the hunting of this dove. They deluged their legislators with letters condemning the proposal. The main reason: all the broken dove hearts that would ensue if one’s life-long mate were shot.
By Sara Drogin